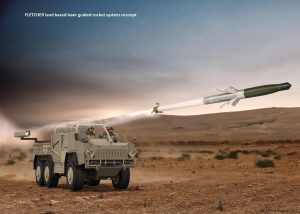 Arnold Defense, a US St Louis based international manufacturer and supplier of 2.75-inch rocket launchers, is unveiling a concept named the “FLETCHER” 2.75-inch/70mm Weapon System. FLETCHER can be mounted on land-based military vehicles as well as, potentially, marine and littoral platforms. The debut of the FLETCHER concept coincides with the DSEi Exhibition taking place in London, 12—15 September 2017.

The FLETCHER concept is supported by a team of global defense industry companies working together under Arnold’s leadership to combine their complimentary expertise. The full team composition has yet to be announced however, at this stage, Arnold are able to confirm the involvement of Military Systems Group, Nammo and Supacat. Working together, the team is able to provide a full-system approach to FLETCHER ranging from design and integration through testing, validation and manufacture into ammunition and through-life support.

Traditionally, 2.75-inch rocket systems have been used as an area suppression weapon, ordinarily deployed by aviation assets. The team has turned this concept on its head with the advancement of guided rocket technology to meet the modern demands of land-based, vehicle mounted and dismounted asymmetric warfare, for special and conventional forces.

FLETCHER is a unique design that allows for ease of operation, maintenance and sustainment in support of combat operations. FLETCHER employs an existing suite of guidance modules, motors and warheads which are already used in well-known programs and are readily available to global forces. Working in-concert with world-class designation equipment, FLETCHER is a fully integrated weapon system that can engage targets at ranges up to 6.5km giving land forces capability that previously required the deployment of air assets.

Currently in the concept phase of development, a demonstrator fit of FLETCHER can be seen on the Supacat stand at DSEi (N9-360) mounted to the Supacat LRV 600, a lightweight special forces platform. Arnold staff will be on hand to explain the system to visitors and specific briefings can be facilitated, by appointment.

Jim Hager, President and CEO of Arnold Defense said “FLETCHER is an exciting new development for Arnold Defense and our team partners. We’re already exceedingly well established in the air environment with our rocket systems being used on air platforms globally. Moving that success into the land environment with our 2.75-inch rocket systems fitted to wheeled and tracked vehicles, as well as in a dismounted role, will provide ground forces with an entirely new capability”. He added: “there is further development work required but if all goes well, we’re expecting to have the system ready for sale towards the end of 2018”.