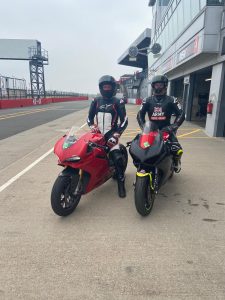 As part of the sponsorship agreement between Chamois and British Championship Motorcycle Racing Team, RSF Racing, their rider, Richard Spencer-Fleet is providing coaching to Chamois clients at selected track days. This week, it was the turn of Alcon’s Group Sales Director, Jon Edwards, who was riding his own Ducati Panigale at Donington Park Race circuit, with Richard as his personal coach. Jon’s bike is the road-going version of the Panigale that Richard is racing in the Ducati TriOptions Cup so Richard’s tips, both on and off track, provided some excellent guidance for Jon to improve his set-up, bike handling and safety skills; essential elements for any road or track rider.

Jon Edwards from Alcon said: “thank you to Chamois for setting this day up for me. I learned loads from Richard that I can take across into my road riding but also, to improve my speed and safety at future track days. I’m certainly riding faster and more consistently as a result of the coaching but importantly, we both had so much fun!”.