Spectra Group (UK) Ltd, world-leading provider of high-grade information security and communication capabilities, have recently been appointed as the UK distributor for US company Comtech Systems Inc with a 5-year contract. As part a contract with Navy Command supported by the UK Defence Science and Technology Laboratory (DSTL), COMTECH have developed a manpack utilising Troposcatter communications technology, due to be available in 2020.

The current 500 Watt Mobile Transportable Transmission Systems (MTTS )  version from Comtech is capable of delivering in excess of 200Mb/s up to ranges of 200km dependent on conditions, whilst the manpack version is expected to deliver more than 5Mb/s using just 10 Watts for ranges in excess of 50km.

This collaboration sits well with Spectra’s ethos of innovation.  Spectra’s own revolutionary Slingshot technology has been a true game-changer in the world of tactical communications.  SlingShot is a unique system that enables UHF and VHF radios to use L-Band Satellite frequency, allowing users to instantly extend the range of their in-service tactical communications equipment to BLOS (Beyond Line of Sight).  Conceived and designed to meet demanding Special Forces requirements, SlingShot offers a significant number of benefits for users requiring secure, reliable and robust communications on the move (COTM).  Over 3500 SlingShot systems are in operation world-wide in the Manpack, Vehicle, Maritime and Aviation variants.

Simon Davies, CEO of Spectra Group said: “Spectra is delighted to have been appointed the UK distributor for Comtech.  With increasing state-level global threats to communications and the potential for denial or degradation of Satellite services, we need to focus on innovation and diversification.  The fresh development of robust, reliable and effective Troposcatter technologies opens up the opportunity to offer multiple long-range, secure communications solutions that don’t rely exclusively on satellite systems.”

The Spectra team will be exhibiting both Troposcatter and their game-changing SlingShot communications system at DSEi 2019, Stand N9-370, at Excel London 10-13 September 2019.

The MLHS is a new surface-based, 23-round, 2.75-inch/70mm precision-guided rocket launcher.  When coupled with the Advanced Precision Kill Weapon System (APKWS), the most accurate precision guided weapon in its class, the MLHS is set to transform the surface defence world by delivering a low-cost, high-capacity surgical strike capability.

Whilst the MLHS is a new system, it represents a significant product development of Arnold Defense’s exceptional FLETCHER surface-based, laser-guided rocket launcher. Prior to the development of FLETCHER, the delivery of precision weapons in support of land-forces necessitated the deployment of air or aviation assets; assets that are expensive and not guaranteed to be available when needed. MLHS offers the same organic surface-to-surface precision effect with the versatility and utility demonstrated by FLETCHER, coupled with significant additional delivery capacity.  Both systems meet the demands of modern surface-based, asymmetric warfare, optimized for use by both special and conventional forces.

Jim Hager, President and CEO of Arnold Defense said “It is always great to be exhibiting at DSEi, where we had the privilege to reveal the FLETCHER concept in 2017.  This year we take that concept a step further with our newest rocket launcher, the Multiple Launch Hydra System”. He added “Both DSEi and MSPO offer a fabulous opportunity to engage with our European and wider international partners and customer base; where Arnold Defense will be showcasing our continued innovation and dedication to providing only the best weapons systems to today’s modern warfighters”.

At MSPO, Arnold Defense will be exhibiting the LWL-12, another of their core products, at the Works 11 booth, E 38- E42.  Meet the Arnold Defense team on their stand, F-47 in the USA Pavilion.

Arnold’s unveiling of the MLHS will take place at DSEi, where the system will be mounted on the UNIMOG LTTV on the Jankel Stand N6-350.  Their FLETCHER rocket launcher will also be on display on BAE Stand S4-200, S4-240, mounted on the Level Peaks M205 tripod, with Capco mount plate. 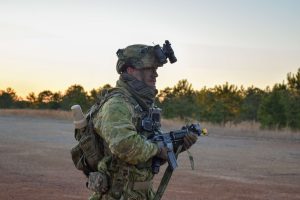 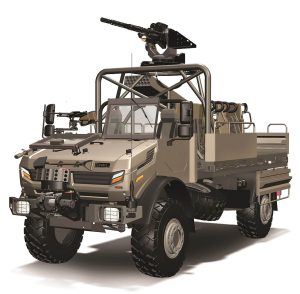 Jankel, a world-leader in the design and manufacture of high-specification defence, security and NGO protection systems, will be launching their new Light Tactical Transport Vehicle (LTTV) at DSEi 2019, taking place at Excel London 10-13 September 2019.

The unveiling of the LTTV at DSEi follows on from the recent contract award for Belgium which will see Jankel deliver 199 of the Mercedes UNIMOG based vehicles to the Belgium Ministry of Defence (BeMOD).  This contract follows the earlier production contract to supply the BeMOD with over 100 FOX Rapid Reaction Vehicles (RRV), based on a modified COTS Toyota chassis system.

Jankel’s LTTV is designed to provide a modular and configurable tactical support vehicle that benefits from unique, removable mission modules that enable the vehicle to be re-roled rapidly for operational platform versatility.  With a payload of over 3 tonnes, dependant on the final vehicle specification, the LTTV has 3 core variants for Special Operations support, including an ambulance variant.  Alongside a user-configurable, fully integrated suite of military sub-systems that includes a removable ballistic protection kit, a Roll-Over-Protection-System (ROPS), weapon mounts and communications fit, the platform will provide full interoperability with the Fox fleet of tactical vehicles.

The LTTV’s versatility already promises to be a world-leader, literally able to plug and play between rear bed configurations.  Combining the strengths of a trusted OEM platform with militarised and mission specific tactical enhancements, Jankel’s LTTV has already attracted the attention of several other countries and is of particular interest to those already operating with the Mercedes Benz UNIMOG platform.

Dan Crosby, Commercial Director at Jankel said: “Our team is very excited to be showcasing the LTTV at DSEi this year.  Having achieved Mercedes Benz Direct Partnership certification, the LTTV is a great example of Jankel’s ability to offer armoured, tactical and utility vehicles based on modified Mercedes Benz chassis systems.” He added: “We believe that the exceptional modular functionality of the LTTV will allow us to build on the significant milestone successes that Jankel has achieved in recent years”.

At DSEi Jankel will be exhibiting at Stand N6-350.  As well as the LTTV, Jankel will have on display a Fox RRV and a wide range of BLASTech specialist seating solutions.