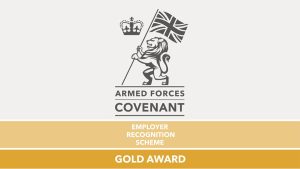 Spectra Group is proud and delighted to announce that they have been awarded Gold for their work to support the UK’s armed forces community. This is the highest award offered by the Defence Employer Recognition Scheme (ERS).  The ERS encourages employers to support defence and inspire others to do the same. Recipients of awards have been recognised as organisations that have pledged, demonstrated or advocated support to defence and the wider armed forces community, and have aligned their values with the Armed Forces Covenant (AFC).

The Gold award is based on Spectra Group having met certain criteria that show what has been done to support the armed forces community, including:

Simon Davies, CEO, said: “We are absolutely delighted and honoured to have been recognised for the Gold Award as part of the Defence Employer Recognition Scheme. It follows years of dedication from our team who continue to work with and support our armed forces community here in Hereford and across the wider UK and beyond. There are plenty more projects yet to come, and we’re excited to display the Gold Standard logo and to carry on working hard to support the UK Armed Forces Community”.